Note: This ceremony has been postponed until the threat posted by COVID-19 has subsided and it is deemed safe to congregate in large numbers again.

Alabama Rep. William S. “Bill” Poole of Tuscaloosa will deliver the keynote address at a commencement ceremony for the University of Montevallo’s spring graduates on Aug. 7 at 8 a.m. at Flowerhill on campus. 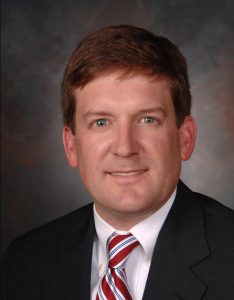 The commencement ceremony was originally scheduled for early May, but was postponed due to the COVID-19 pandemic. During the outdoor ceremony on Aug. 7, social distancing guidelines will be in place for attendees.

Poole, a native of Dayton, Alabama, was elected to serve House District 63 in 2010 and is serving his third term in the Alabama House of Representatives. His district includes the University of Alabama, portions of the both the Tuscaloosa City and Tuscaloosa County school districts and most of the city of Tuscaloosa.

After serving his first legislative session in 2011, Poole was identified by veteran lawmakers interviewed by the Mobile Press-Register as the top member out of 34 new lawmakers in the House of Representatives.

He is involved in several community groups, including the West Alabama Chamber of Commerce, Outback America and is a member of the Board of Directors for the Boys and Girls Club of West Alabama.

He is a practicing attorney at the Tuscaloosa firm Watson & Poole Attorneys at Law, is a staff assistant for the U.S. House of Representatives Committee on Ways and Means, is an international trade analyst for the Washington, D.C., law firm of Sandler, Travis & Rosenberg and is a manager in the Federal Affairs Division of the Pharmaceutical Manufacturers of America.

Poole is a graduate of The University of Alabama and the UA School of Law. He and his wife, Niccole, are the parents of Sally, William and Whittman Poole. The Pooles are members of First United Methodist Church in Tuscaloosa.

Where are you from and what city do you currently reside in? I am from Montevallo, but I now reside in Helena. What is your title with the University of Montevallo? I am blessed to be the chief of police and director of public safety. What degrees do you hold and from what schools? I […]