Senior mass communication major Lola Garcia has future plans of breaking down cultural stereotypes through impactful journalism, and said the personalized attention she has received from her professors at the University of Montevallo is preparing her to make a difference. 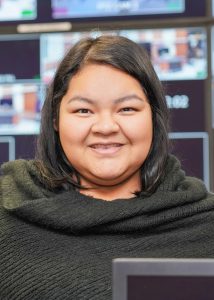 Garcia, whose degree is focused on multimedia journalism, plans to use her UM education to become a reporter and tell the stories of individuals who have historically been underrepresented in the media.

“Through the major, we get to get out and talk with members of the community, and that’s one thing I love about it. We get to be a part of peoples’ lives and learn more about them and tell their stories,” Garcia said.

After getting involved in a multimedia team in high school, she knew she wanted to use the medium to make an impact in the community. As a transfer student, Garcia said she was excited to learn UM offered a major tailored specifically to her future goals.

“Mass communication was something I had never heard of before I got to Montevallo. I love the program, because it will allow me to bring awareness to people who have different backgrounds and help to combat some of the stereotypes that are out there,” she said. “My professors are always supportive of whatever I want to do, and I really appreciate that. I love that here you can focus on what you want to do, and the professors will work with you to hone your skills in that area.”

While walking on Montevallo’s campus one fall, Garcia said she realized UM’s brick streets and sidewalks are a perfect representation of the school’s welcoming atmosphere.

“Like the bricks, we’re all shaped differently and we all have different backgrounds, but this is a place that welcomes those differences,” Garcia said. “I feel like I have my own space here.”