When Jamiya Williams moved from Adamsville, Alabama, to the University of Montevallo to earn a degree in psychology, she was shy and reserved.

But in the four years she spent at UM, everything for Williams – also known as Ms. Montevallo – changed. 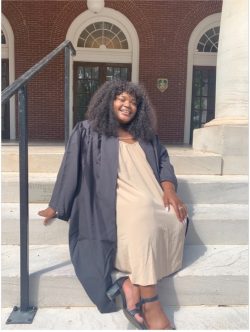 “Before I came to college, I was really quiet and shy and didn’t talk to people but being an Orientation Leader and in TRIO, I met really nice people who believed in me,” Williams said. “They encouraged me to grow and being given so many opportunities, it just became an overall good experience.”

“The TRIO team and Ms. Jenny Bell, who is the director of student life, really helped me by seeing past my shyness and seeing a leader in me,” she said. “She acted on that by giving me the opportunity to be in Freshman Forum and an Orientation Leader.”

The confidence Williams built up serving in those roles went a long way, leading her to seek becoming one of the primary student faces at the University: Ms. Montevallo.

She ran for Ms. Montevallo with no slogan and no frills, just on the reputation of her good name and some campaigning.

“I didn’t have a slogan. I passed out flyers and buttons  and made Instagram posts that just said, ‘vote Jamiya.’”

It worked. When the results came in after voting ended during Falcon Week, she was declared the winner, and served in the role from when she was crowned in February until she graduated in May.

“It’s been amazing. I am so appreciative of the student body believing in me to be the face of the University. I’m still in disbelief honestly and am honored to have the position.”

Williams graduated in the spring 2022 commencement. She plans to pursue a Ph.D. in clinical psychology with a specialization in psychological trauma in adolescents.

She said she’s fascinated by how trauma greatly impacts the executive cognitive functions of adolescents due to those functions being malleable. She hopes to find ways to help curb that impact.

Looking back on her time at UM, she fondly remembers College Night – she’s on the Gold Side – and the lifelong friendships she formed from her involvement in it, and is grateful that the greatest gift she’s leaving the University with is belief in herself.

“If I go into the workforce not believing in myself, I would not be much help to my employers. Learning to be able to apply myself has truly affirmed me. I know from my time here that I have a place, and that what I do has validity.”

Ellie Tarpley is grateful for second chances. In 2007 she came to the University of Montevallo as a mass communication major with aspirations of becoming a writer. She graduated in 2011, but shortly afterward went through a divorce, became a single mom and struggled to find a job in her field. “Things didn’t turn out […]