Gemali Alcantara is a first-generation college student from Honduras.

Without any guidance, he aspired for more and so he sought it out. College was the route that he decided would be best, but he wasn’t sure how he’d pull that off. Then, the University of Montevallo opened a door.

“Many schools accepted me, but none provided me with the financial means I needed to attend school except for Montevallo,” said Alcantara, a junior majoring in finance and minoring in non-profit studies.

“UM admitted me and provided a Martin Luther King Jr. Scholarship, which helped me get established.”

It wasn’t just scholarships that UM helped him with. Programs such as M.A.D.E. (Minorities Achieving Dreams of Excellence) and TRIO have helped guide him through his undergraduate experience by providing him with academic, emotional, developmental and leadership support. 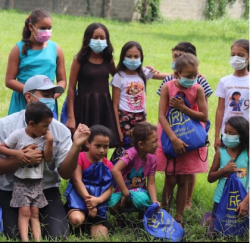 “Because of TRIO and M.A.D.E. I’ve been able to give back using grants,” he said. “They helped me secure grants to create a non-profit to help feed hungry kids and provide them with school supplies back in Honduras.”

Alcantara said during his return trips to Honduras, he visited different schools and witnessed the daily struggles that children face in order to have sufficient supplies to learn. This prompted him to act.

He and his nephew took a week to collect information on the most affected children and the resources they needed. They approached the owner of a grocery store who agreed to help them by developing a sticker that asked people inside the store what items they would like to donate. The sticker would then be placed on those items, they would be separated at the register and donated.

“Amazingly, we were able to offer books and bags of groceries to more 200 children,” he said. “I am delighted that with everyone’s help we can make a substantial impact in someone’s life.”

Alcantara hasn’t named the organization yet but is working on it.

Alcantara said he’s grateful for all that UM has invested in him as a student and the support the institution has provided him in achieving his goals and dreams. The University has demonstrated that he not only belongs at Montevallo, but that Montevallo believes in him.

Angel Perry, a University of Montevallo graduate student pursuing a master’s degree in counseling with a specialization in clinical mental health counseling, was selected as a recipient of the prestigious Albert Schweitzer Fellowship of Alabama. The Alabama Fellows Program is one of thirteen active Schweitzer programs across the U.S. dedicated to developing a pipeline of […]

This past summer, Allie Dishman, a junior majoring in biology on a pre-med track, participated in the opportunity of a lifetime. She worked at the Harvard Medical School National Center for Functional Glycomics under the esteemed Dr. Richard Cummings ’74, the Center’s director and a University of Montevallo alum. “Words can’t describe how amazing it […]