Coming to the University of Montevallo as a transfer student a couple of years ago, senior Armando Flores wasted no time in getting involved with his new college home. 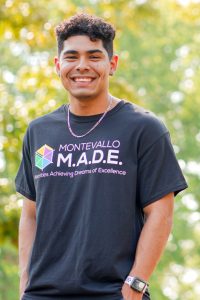 His eagerness to join several of UM’s student organizations not only helped him to surround himself with new friends, it also helped to prepare him for the next steps in his life.

“Coming in as a transfer student was very intimidating the first days, but I knew I wanted to make the most out of my two years here,” he said. “I committed myself to be a part of many organizations to prepare for what is ahead after undergrad.”

Despite being at UM for a little more than a year, Flores, who will earn his bachelor’s degree through UM’s award-winning Exercise and Nutrition Science program next spring, already has a lengthy list of campus leadership positions to add to his résumé.

He currently serves as the president of the UM Hispanic Student Organization, is an ambassador in the Minorities Achieving Dreams of Excellence (M.A.D.E.) program, is secretary of the Alpha Kappa Lambda fraternity and is involved with TRiO, the Phi Theta Kappa honors society and Gold Side athletics.

For Flores, these opportunities were some of the major draws to UM.

“I knew I belonged at Montevallo when I first stepped on the bricks, and was immediately welcomed by everyone during the tour,” he said. “I had also noticed the endless opportunities for students on campus.”

After earning his undergrad at UM, Flores plans to seek a graduate degree in physical therapy and eventually a doctorate.

But no matter where life takes him in the future, Flores said he will always appreciate the opportunities, high-quality education and close-knit families he enjoyed during his time at Montevallo.