At the second installment of the distinguished Dr. Wilson Fallin Jr. Lecture Series held at the University of Montevallo’s Center for the Arts on Oct. 13, Flowers shared the story of her “push” through adversity and the improbable triumph at the end of her cold road to gold.

“Great people come out of Bessemer,” she said after being introduced by Dr. Greg Samuels, UM’s chief diversity and inclusion officer and the lecture series organizer. “We got Eddie Levert, Bo Jackson, Gucci Mane and your very own Dr. Fallin.”

“I’m here to leave you with one special message. Everyone needs a push. NASCAR needed Bubba Wallace to help fight against institutional exclusion. America needed Simone Biles to help understand the pressures and challenges of mental health. Tennis needed Venus and Serena, and we can’t forget about King Richard. And Dr. Martin Luther King Jr. needed the Civil Rights Movement.”

She said there are times in life when accepting what is and doing nothing isn’t enough. Change occurs when a push happens. 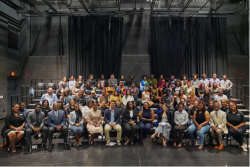 At a 30-minute question and answer session with the UM Minorities Achieving Dreams of Excellence (M.A.D.E.) program earlier that afternoon, Flowers explained how she got her start running down Bessemer streets never thinking about the Olympics.

While attending Jonesboro Elementary School, a track coach, Dewitt Thomas with the Alabama Striders Youth Track Program, came to her school to recruit runners for his team. Flowers ran swifter than everyone at her school, including the boys. Thomas recruited her.

“From that time on, he was my inspiration,” she said. “He saw something in me at 9 years old that I didn’t even know was there.”

“He told me I think you’re special and can be the next Jackie Joyner-Kersee. …I wanted to work hard and not let him down.”

From that moment on, she watched the Summer Olympics. Joyner-Kersee became her role model and she dreamed of being the best runner in the world. After watching the Olympics opening ceremonies, she knew she had to become an Olympian. That was her goal, and she would pursue it until she achieved it 17 years later.

She ran track in high school, adding volleyball and basketball to her extracurricular activities to stay in shape in the off-season. She earned a full track scholarship to The University of Alabama at Birmingham.

Her first opportunity to become an Olympian came in 1996 during the Summer Olympic trials in Atlanta. She competed in the 100-meter run and long jump. She finished 13th, which wasn’t high enough to qualify for the team.

“This was my ultimate goal in life,” she said. “This dream made me feel I could be somebody and accomplish something no one in my family had ever dreamed of doing. So instead of giving up, I had to keep the faith, continue working hard and believe the doors of opportunity are always open.”

Her next chance came four years later in 2000. She trained year-round preparing for a trial that took less than 10 seconds to complete. But she was confident, that is until she got injured, and had to undergo her fifth surgery in eight years.

With only four months to recover before the trials, she was determined to recover quickly but knew that realistically it wasn’t likely. She recovered in enough time to compete, finishing in 12th place. She didn’t make the team.

“My husband and I knew it was time to start the next chapter in our lives. I had to deal with reality. I was a wife, I was 26 years old, and my husband and I planned on having six kids in the near future. It didn’t work out that way, thank God.”

“Throughout all my ups and downs, I didn’t realize that God was preparing me for something truly amazing. With disappointment staring me in the face, an opportunity came knocking at my door.”

At the trials, while walking through a hotel, her husband spotted a sign encouraging athletes to try out for the U.S. bobsled team. He presented the idea to Flowers, but she wasn’t interested. For two days he tried to convince her, and she finally reluctantly agreed.

They tried out for the team together, but he pulled his hamstring. Sidelined, he encouraged her to compete for the family. A few weeks later, she received a call that made her re-evaluate her future and life’s goals. She made the team, but she wasn’t sure she wanted to be a part of it.

“We had to make a tough decision. We were recently married. We had a plan and were ready to cross over to become parents. This could split us up for several months at a time. The only thing I knew about bobsledding was what I learned from the movie ‘Cool Runnings.’”

With her husband’s support, she departed Birmingham and flew to Germany to learn how to push a 450-pound bobsled. The cold weather was harsh, but she persevered.

At the end of her first season in the sport, she and her teammate at the time, Bonny Warner, ranked 2nd in the U.S. and 3rd in the world.

Her dream of representing the U.S. in the Olympics was closer than ever. And yet, the threat of it once again escaping her reared its ugly head.

Flowers was cut from the team, shattering her dreams. She wound up on a plane back to Birmingham leaving behind a sport where she had proven to be one of the best in the world.

“I couldn’t believe what happened. My career was over.”

“I had mentally given up but physically I continued to train,” she said in tears.

A month after getting kicked off the team she received two offers to rejoin it. She tried out for Bakken’s team. Most women bobsledding teams had years to train together. They had two months.

They competed in one race before the trials. They finished fifth. They weren’t expected to win the Olympics.

But they weren’t limited by other people’s expectations. They won, earning first-place gold medals and making history. Tears flowed freely down Flowers’s face as chants of USA filled the chilly air that day on Feb. 19, 2002.

“Going to the Olympics and winning gold was a dream come true. I know my story is filled with twists and turns, ups and downs, but I believe that if you have big dreams, you’re willing to take risks and if you walk by faith and trust in God you can do anything you want.”

“If a girl from Bessemer, Alabama, who had dreams of going to the Summer Olympics, could go to the Winter Olympics and win a gold medal, then anything is possible. And remember, everyone needs a push.”