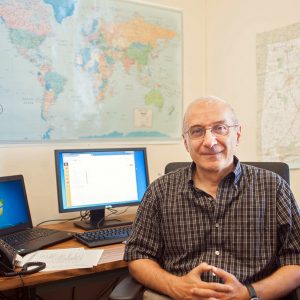 If you took classes in the Stephens College of Business within the last decade, there’s a high probability you’ve experienced firsthand the warm personality and engaged teaching of Dr. Alexander Mechitov.

In his 17 years at UM, Mechitov has published 35 articles, averaging an impressive rate of two papers per year. In 2003, he was named the University Scholar, one of the most prestigious titles given to UM faculty.

He’s also been nominated three times for Who’s Who Among American Teachers by his students, and last year, he received the prestigious UM Best Graduate Teacher Award. “For a person with a very strong accent to be appreciated by students so much, it’s a really big honor to me,” said Mechitov.

That accent is a touchstone of his former life in Russia. Growing up in Moscow as a boy, he remembers being fascinated with a large world map in his childhood bedroom. As he grew older, he showed deep interest in the global affairs that the map represented: politics, economics, geography, social issues and demographics.

While pursuing a degree at Moscow State University’s Economics College, he met his future wife, Dr. Helen Moshkovich. The two later found positions and pursued Ph.D.s within the Institute for Systems Analysis, a branch of the prestigious Russian Academy of Sciences.

In 1990, Mechitov traveled to the U.S. for the first time to take part in the International Society on Multi-Criteria Decision Making’s annual meeting at George Mason University in Fairfax, Virginia. There, he met a colleague from Texas A&M University that helped him gain his first visiting professorship in an American school.

After a few visiting and full-time stints at Texas A&M, East Carolina University and the University of West Alabama, Mechitov and Moshkovich learned of an open position for a management information systems professor at UM’s Stephens College of Business. They visited and thought the school presented a promising opportunity. But the couple was looking for two positions, not one.

It was a surprise when Dr. Nancy Bell, dean of the SCOB at that time, came back to the couple after an initial meeting and agreed to offer faculty positions to both of them.

“I consider Alex Mechitov and Helen Moshkovich the best hires of my entire career.  With their outstanding teaching, academic and service records, it was really an easy sell to talk President McChesney into creating an extra position so we could have this incredible team at Montevallo. They are Montevallo’s dynamic duo,” said Bell when asked about her decision.

While Mechitov takes pride in his achievements and abilities as a researcher, he is also a passionate and highly capable teacher. One of his biggest goals is to inform and push his students to consider taking their academic careers beyond just an undergraduate level.

“I want them (students) to take full advantage of what they can get in these spaces,” said Mechitov. “When no one in your family or no one in your close environment is from academia, often students just don’t think about this opportunity.”

It’s a mission he plans to continue with the resources available to him as the newly appointed and second-ever Michael J. and Donna H. Grainger Endowed Chair in Business and Accounting, a title first given to his wife, Helen, in 2015.

“Alex Mechitov is an outstanding scholar and teacher,” said Dr. Stephen Craft, dean of the Stephens College of Business. “His many years of service make Dr. Mechitov an outstanding choice to be the Grainger Professor in Business.”

In addition to using the position to expand his own work, he also hopes to boost research opportunities for his students at both the undergraduate and MBA level.

By Emily Reed After being named UM’s chief diversity and inclusion officer in 2020, Dr. Gregory Samuels has spent much of his time working to promote an all-inclusive campus environment. “My goals center around having a campus that strengthens, advances and sustains increased diversity, equity and inclusion and actively promotes social justice,” Samuels said. Samuels […]

In 1936, on assignment for Fortune Magazine, writer James Agee and photographer Walker Evans spent eight weeks documenting the lives of impoverished tenant farmers living in Tuscaloosa and Hale counties.  Though the article was never printed, Agee’s descriptions of life as a sharecropper under the weight of the Great Depression and Evans’ striking photography were eventually […]