As a founding father of Phi Gamma Delta, former SGA vice president and current College Night leader, Kirkwood is just as involved on campus as he is in the lab. This dedication to both his career and to the University made him a prime candidate for this prestigious opportunity. 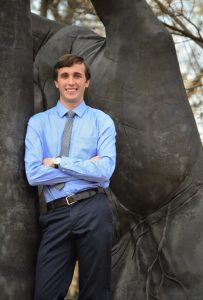 During the three months Kirkwood spent in Boston, he experienced the environment of a high-profile research lab. He worked with his mentor, research fellow Dr. Deniz Eris, on a project involving human breast milk and the activation of the immune system. Kirkwood said he was treated as an equal in Cummings’ lab and got a glimpse of what a career in the medical research field would look like.

Cummings received his B.S. in biology from the University in 1974. He went on to get his Ph.D. from Johns Hopkins University. He trained there, as well as Washington University in St. Louis, before going on to work at other prestigious institutions such as Emory University and eventually Harvard Medical School.

He is a co-founder of the fields of both glycomics and glycobiology, and a co-editor of the first, second and third editions of “Essentials of Glycobiology.” During his years in the medical field, he has written more than 275 peer-reviewed publications, over 60 review articles and dozens of book chapters.

According to Kirkwood, Cummings still held his old UM professors in high regard, a fact the senior biochemistry major connected to immediately.

“The style of professor that [UM] attracts are the ones who really care about developing an environment where education is first,” said Kirkwood. “They all do research, they all care a lot about research, but they want to develop the students first.”

As he finishes his senior year, Kirkwood is optimistic about his next steps pursuing his future in the medical field.