The purpose of the 1896 Society is to recognize and thank the individuals who have made the University of Montevallo Foundation a part of their estate plans. Make a difference in the lives of tomorrow’s students by becoming a member of the 1896 Society today! 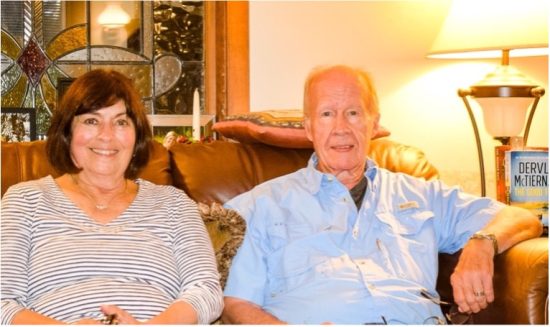 It was around the midnight hour in the late summer of 1960 when Dr. Jonathan Bullock arrived at the University of Montevallo for the first time.

His family left Mobile at a decent hour that day, but while on the road, the generator in the 1955 Chevrolet they were driving went out and they had to get it repaired.

With the generator fixed, they hit the road and made it safely to UM where Bullock, who goes by the name Jon, would spend the next four years of his life coming-of-age.

Jon was a good all-around student in high school. He figured he’d major in chemical engineering in college, but Montevallo didn’t have the major he was looking for. He came to Montevallo anyway because his momma said UM was the school for him, and he wasn’t going to argue with that.

It turned out Momma was right. He found his place at the brick-paved campus. And more than that, life at UM helped him figure out who he really was.

“I went to Montevallo with the idea of doing a few years of undergraduate work then transferring,” he said. “When I got there though I realized my interest was more in chemistry than chemical engineering. I had some good professors who encouraged me to work on interesting things.”

“I was a nerd when I first arrived, and in my first year or two I wasn’t a stellar student generally. But I never made less than an A in chemistry. In addition to the academic side of things, I learned to become a complete person, and I think Montevallo is a good place to do that.”

Marie Bullock, Jon’s wife of 53 years, attended the University of Tennessee. But when she visited Montevallo with her husband, she said she wished she had chosen to become a Falcon instead.

“I don’t think I had seen a prettier campus,” she said. “Everyone was so warm and inviting and I thought ‘gee, why didn’t I go there?’ I never felt anything like the companionship that I felt right away at Montevallo. It’s like there’s so much electricity in the air.”

Jon said he was particularly fond of College Night. As a proud member of the Purple Side, he described it as a unique experience where students’ imaginations, creativity, talents, hard work and ability to cooperate are magnified.

After graduating from Montevallo in 1964, he spent the summer working on a construction site in Mississippi. It happened that a lock was being constructed to bring Saturn5 rockets up the Pearl River to test at the Stennis Space Center, before qualifying for the moon program. He then enrolled at Tulane University where he spent the next four years earning a Ph.D. in physical chemistry.

“When I was in graduate school, we recorded data using pen and paper and processed it using a desktop calculator. It reminds me just how much the times have changed,” Jon said.

Once he completed his doctorate, he didn’t bounce around. He was hired to work in the Chemistry Development department in the Development Division at the Y-12 National Security Complex in Oak Ridge, Tennessee, and stayed there until he retired.

“I did a lot of different things,” he said. “I did electrochemistry, corrosion, electrochemical machining, electroplating, cold fusion, metallurgy and later in my career before I retired, in collaboration with a colleague I did some metallurgy that I got a patent on. I got about four patents total in my career, which is a little difficult because the work I did was mostly classified. It was also a privilege to collaborate with colleagues at the Oak Ridge National Laboratory, and at the other national laboratories associated with the Department of Energy.”

Now that he’s retired, Jon said he and Marie have had a lot of time to consider what kind of impact they want to make on the world. They’ve decided that one of the biggest impacts they can make is leaving UM a part of their estate. “I think providing an education in a place where kids can grow up and become adults, complete humans, is extremely important,” he said. “I was pleased with my experience at Montevallo, and with there being things that I can do to help, I think it’s important to do what I can to make things better for future students.”

“I’m giving half of my gift to the University’s general fund and the other half toward the sciences. It’s important to give young people at Montevallo the chance to grow up into great people.”

Learn more in the October 2022 issue of the 1896 Society Newsletter.

The information contained on this web page is not intended as legal or tax advice. Donors should, therefore, consult with their personal advisors for such advice.