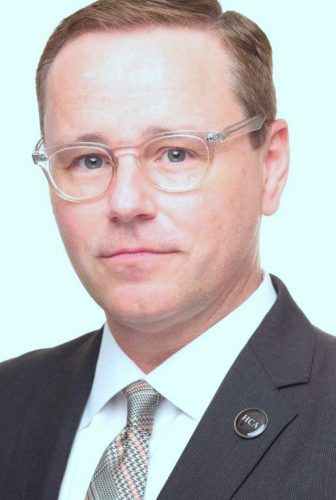 Given enough time, what was once old can become new and return better than ever. As the newer generations attempt to successfully navigate adulthood, those that came before them can make their mark by providing stepping stones along the way. It’s not about leading someone down the specific path you took. It’s about providing the means to a path. For alumnus Joe Hill ’86, it’s a guiding principle for why he gives back to his alma mater.

“You can tell someone about your UM experience, but I believe it’s more meaningful when you can provide an opportunity for someone who’s coming after you to make their own experience,” said Hill. As an HR executive, Joe has built a career centered around helping people move to the next level in their professions, and his own personal journey is reflective of this passion.

As he prepared to graduate from Valley Head High School near Fort Payne, Alabama, Joe knew a state college or university was where he needed to be. He learned about Montevallo from another classmate who was offered an academic scholarship. Joe was on track to be the salutatorian of his graduating class and knew he would qualify for the same scholarship. So, he applied and was accepted.

Joe was determined to make the most of his four years at the University of Montevallo. “College is not just about a textbook education – it’s also about growing into who you are,” said Hill. He found a mentor and friend in his academic advisor, Dr. Jerri Hayes Bullard. He also joined the Pi Kappa Alpha fraternity, was senior class president and participated in College Night for four years on the Gold Side, which he led to a victory in 1988. “Patrick Evans ’88 wrote a homage to Shakespeare titled “Avon Calling.” The Birmingham Opera Theatre performed it in 1989. As far as I know, it’s the only College Night production to be performed in Birmingham,” Hill said. Alumna Amy Holt Aviles ’88 directed the show.

Joe’s career in human resources began at the Southern Institute in Birmingham, where he interned while at UM. He also applied for a temporary job at Erlanger Hospital in Chattanooga, Tennessee. It was supposed to be a one week assignment in their HR office, but it turned into a full summer job. He has remained a human-resources professional in health care for 28 years, moving up through the ranks of management and leadership. “I love training leaders,” said Hill. “I use what I learned at Montevallo every day.”

Joe recently reconnected with several members of his Montevallo family thanks to social media and was surprised to find how many of them lived in the Nashville area.

One of the many alumni Joe reconnected with was fellow Gold Side leader Melanie Poole ’86. Melanie had just recently made a gift to name the Melanie Poole Art Gallery in the forthcoming Center for the Arts, a multimillion dollar construction project that will provide the UM with state-of-the-art performance facilities, galleries and other creative spaces.

Melanie thought Joe might be interested in the project, and she was right – he made a gift to name the Joe B. Hill, Jr. Green Room. He also hosted a fundraising event for the Center for the Arts in Nashville and plans to host another one in the near future. “I look forward to seeing where this project takes the University,” he said. “It’s more than just new bricks and mortar. What comes from it is going to help the students and the community. This project will give someone a place to experiment with who they want to become and give them the tools to see how far they can take their experience – to do the same things that I did but take it to the next level – and I want to support that.”