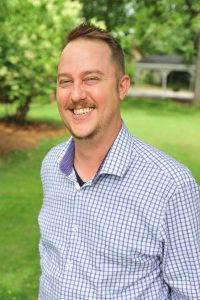 “I found a home I wasn’t even looking for,” is the first thing Jeff Purvis ’02, MBA ’16 would tell you about his Montevallo experience. A life-long Alabama resident, Jeff grew up in Hoover, a middle child in a traditional family. He had set his sights on Auburn University when he graduated high school. Though he still enjoys watching Auburn football, he is proud to call Montevallo his alma mater.

Jeff admits he wasn’t a great student in high school. “I was bright, and I got an exceptional ACT score, but I didn’t apply myself academically. I graduated with a 2.76 GPA. My parents didn’t want me to pursue Auburn University if I wasn’t going to take college seriously, so I stayed home and enrolled at Jefferson State Community College. During my time there, I matured and began to apply myself to my studies. Then, I met a recruiter from Montevallo named Lynn Gurganus (’83, M.Ed. ’90). He told me his Montevallo story in such a way that I knew I wanted to have my own Montevallo story.”

At Montevallo, Jeff pledged Pi Kappa Alpha and declared a double major in Social Work and Psychology. These two influences brought him back to the University after he graduated, first as a donor, and more recently as a member of the Junior Board.

Jeff said his first gift to UM was $25 to the Social Work Program. “As a student, my peers and I were able to go to social work conferences because others before us had given to the department. Our professor, Dr. Susan Vaughn, always reminded us of this, and she encouraged us to give back when we graduated so that the students after us could participate.”

After graduating, Jeff completed his master’s degree in social work at the University of Alabama and began working full-time in the field. He continued to make small annual contributions, and he stayed involved with his fraternity as an alumni advisor.

Jeff received the Alumnus Loyalty Award in 2012 (now known as the Mary Lou Elder Williams Alumnus Loyalty Award). He said, “During my acceptance speech, I encouraged the audience members to make wise use of their time, because it’s a precious commodity; to give from their hearts, giving to the best of their ability in all things; and to pay their dues, because nothing is free, and gifts to organizations like the University of Montevallo help others do important work.”

After a few years, two events changed the course of his young adult life. They were unrelated, but they had the same impact. In the end, he decided to step away from his career as a social worker and go to work at the family business in Calera – a move he thought of, at the time, as temporary.

“There was a work situation, and there was a family situation at the same time, and I left to help the family. It’s become a part of my legacy that I wasn’t expecting. I’m the third generation of my family to be involved in this business. It opened doors for me to take a leadership role in the community, and through my involvement with programs like Leadership Shelby County I have fallen in love with this place. For me, there is no better place to have the highest quality of life.”

His career shift also paved the way for him to return to Montevallo as an MBA student in 2014. “I had people skills, and thanks to my social work major, I understood human behavior and could effectively manage people, but I needed a better understanding of finance and accounting in my role at the family business.”

Jeff’s monthly gifts to the University have increased over time as he’s discovered new areas of interest. “I give to very specific funds. I have a continued commitment to the Social Work Program. I also give to cross-country, because I love to run, and I admire the ability of student athletes to balance the demands of school and team work. Now, I also give to the Michael E. Stephens College of Business.”

He also supports unrestricted giving. “I have realized that there are projects that the University is passionate about that I might never know about, but I can support them when I designate part of my monthly gift as unrestricted.”

One of the highlights Jeff shared of his time as a member of the Junior Board also centered on philanthropy. “I watched the Junior Board endow a $25,000 scholarship from start to finish and award it for the first time. They’re starting another one, and while I won’t be on the board to see it completed, both scholarships will be a part of my legacy here, as well as the legacy of others who helped fund them.”

Jeff’s gifts support the University’s comprehensive fundraising campaign The Campaign for the University of Montevallo: It’s About Family, a multi-million dollar investment in the knowledge, expertise and values that Montevallo graduates take into their lives and into their professions.

As he reflected on his own Montevallo story, he concluded, “I’ve heard it said that you get as much as you put in. Well, I think I’ve received way more than I can ever put in. I give back, and I encourage other alumni to give back, because I believe our giving makes a difference. In Gandhi’s words, ‘Be the change you wish to see in the world.’”

For more information about the Campaign for Montevallo: Its About Family, contact Gary Johnson, Comprehensive Campaign Director, at 205-665-6217.