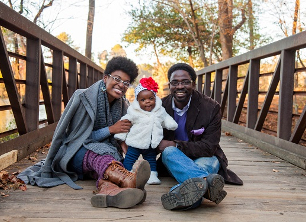 Life sometimes has a funny way of bringing two people together. They can grow up in the same city, attend the same school, have the same friends, and yet never really connect. This is true for Montevallo Alumni Fred ‘04 and Terra ‘06 Miller, who were each on their own distinct life path, and as those paths crossed over the years, it was their common Montevallo connection that finally brought them together in a city miles away from home.

Fred is a 2000 graduate of Ramsay High School in Birmingham. He visited several campuses before he came to Montevallo, and he immediately saw the difference in the way Montevallo personalized his visit. He had an opportunity shortly thereafter to meet then-President Dr. McChesney and was impressed by the way he took the time to have a real conversation with him.

Terra is a 2003 graduate of Ensley High School in Birmingham. She had a guidance counselor who made the students apply to every school in Alabama. Terra, who wanted to be a cheerleader and a chemistry major, says she visited Montevallo’s campus on a whim. She and her parents showed up unannounced one spring afternoon, and within a few minutes of their arrival, she was on a campus tour and had a meeting scheduled with then-chair of the chemistry department, Dr. Scott Peterson. Even after she was accepted, she says her decision to enroll wasn’t finalized until almost the end of the summer.

Fred and Terra knew each other through mutual friends during the year and a half that they were both on campus, but they didn’t become close during that time. Fred had joined Kappa Alpha Psi, was pursuing a double major in Political Science and History, and was on the Purple Cabinet for College Night. Terra, a McNair Scholar and a member of Delta Sigma Theta, decided to study Mass Communications. Fred graduated and in 2005 moved to Washington, D.C. He joined a growing network of Montevallo alumni moving to the area. He says, “I slept on a few couches at the beginning. That’s what we did for each other to help each other out.” Terra enrolled in graduate school at the University of Alabama after she graduated. They didn’t stay in touch.

It wasn’t until Terra decided to pause her graduate studies to pursue a fellowship program for the National Cancer Institute in Bethseda, MD that the two reconnected. A mutual friend called Terra and let her know that Fred was living in D.C. and could help her meet other Montevallo alums living in the area.

Fred knew early on that he wanted to be more than just her friend, so he created as many opportunities as he could to take her out to group events and introduce her to Montevallo alumni and friends he’d made in D.C. Terra recalls, “The group events got smaller and smaller, until eventually it was just Fred and me.” He adds, “A friend of mine told me that he couldn’t keep going out with us and that I needed to just ask her out.” Fred finally made his move, and they’ve been together since. Terra completed her graduate coursework and was in the dissertation phase of an M.A./Ph.D. program when she moved to D.C. in 2011.

Life has brought Fred and Terra’s journey full-circle. They moved back to Alabama in 2016, and in June they welcomed their first-born child, a daughter named Uni. Their connection to Montevallo remains strong. They come back to campus every year for Homecoming and College Night. They are both recipients of the Nathalie Molton Gibbons Young Achiever Award, and Terra has served on the Junior Board and is currently on the Alumni Board. They both started giving back to the Foundation early after graduation. Terra says, “At first it was just $5 here and there, and then I began making a monthly gift after I saw a presentation about how Unrestricted Giving helps the University.”

She continues, “You hear about the big gifts and think ‘I can never do that,’ but most people don’t realize how small gifts make a big difference. Any amount can be used, and it’s a way to leave your forever mark on an institution. I think about my own experience when I was a student. It was small amounts I received over the years that really kept me going, whether it was $100 for books or assistance from the career center to help meet other needs. That’s why we include Montevallo every year in our charitable giving.”

Fred and Terra most recently made a gift to the University’s Great Start program, which supports students who exhibit potential for success but don’t necessarily meet traditional enrollment requirements. Their generous support will provide financial assistance to incoming Freshmen who are enrolled full-time and are participating in the program. Their gift ties into the first of five priorities for the Campaign for Montevallo: It’s About Family – Scholarships and the Student Experience.

Terra and Fred agree that the need to help fund the Great Start program appealed to them on a personal level. Terra says, “This program spoke to both of us for so many reasons. We’re both part of a minority group, which is the group of students they talked about serving. We both graduated from Birmingham City Schools, where minority enrollment is 98% of the student body. I didn’t have the highest ACT score, but I knew I was smart and could be successful. We believe that by supporting this program, we can help a young person with potential like we had be successful.”

Fred says, “We believe in what the campaign is trying to do, and we have confidence in Dr. Stewart’s vision for the University. That’s why we decided to increase our giving when the It’s About Family campaign started. It’s about helping others to have the same experience that we did, and I believe we do that through what we give.”

For more information on the Campaign for Montevallo:It’s About Family visit the campaign website or call Gary Johnson, Comprehensive Campaign Director, at (205) 665-6217.