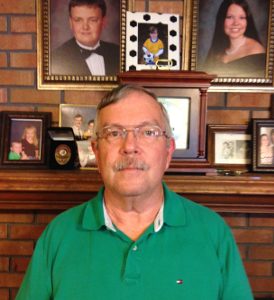 Family is a major part of the Montevallo experience. Whether you’re part of a long legacy, or starting one of your own, you can feel the presence of past and future generations living in the campus walls. Family is not always about blood. It can be the lifelong relationships made during some of the best years of your life. Eddie Czeskleba is lucky enough to share his Montevallo legacy with both kinds of family. As he sits in the student Call Center in Reynolds Hall, he stops mid-story to stare off to the side for a moment. It is clear that he is thinking of all the amazing and beautiful memories he has of his hometown and campus. His passion is prevalent, and for good reason. He has been a part of the University of Montevallo from birth, and he understands the legacy of the Montevallo family in a unique and powerful way.

James Edwin (Eddie) Czeskleba was born in 1953, to Bert and Verna Czeskleba. He grew up in Montevallo, visiting the campus almost daily as a child while his father worked as an electrician in the Physical Plant. Verna was a student at Montevallo in the 1940s, and Bert began working on campus in 1950. Eddie enrolled at the University in 1971, graduating in 1975 with a degree in pre-med. Although he did not attend medical school, Eddie firmly believes that his education has been helpful to him for his entire life. He participated in work study for the physical plant as a student, and chose to become a full-time electrician, following in his father’s footsteps.

Eddie’s wife, Karen Nix Czeskleba ‘75, is a fellow Montevallo graduate with a degree in accounting. The couple married in 1978, three years after graduating from the University. They have four children, all of whom attended the University and finished in four years. Their youngest daughter, Barbara ‘12, works at the Student Activity Center on campus; and their youngest son, Mark ‘05, works at the University Police Department. Keith ‘03, their oldest son, is married to a fellow Montevallo alumna. Eddie retired February 1, 2006; the same year his oldest daughter, Mary ‘10, enrolled at the University. He has three grandchildren, who he hopes will continue his family’s legacy by attending the University of Montevallo. He says there has been a Czeskleba on campus every year since 1950, the only exception being the year after his father passed away.

For Eddie, the students have always been top priority. He hopes that every Montevallo alum helps to give others the opportunity to experience the campus the way they did. “If every alum could give just a little bit, it would make a big impact on student success,” he says. And he should know. As an employee, Eddie participated in Foundation campaigns through faculty & staff giving. He saw firsthand how a large number of small contributions added up, and he saw everyday how those gifts helped students. His love for the students is one reason why he enjoys speaking with the Call Center students. He admires their ability to remain joyful and engaging with alumni while going to school full-time. He loves knowing that they are students helping other students. He remembers when the Call Center was in Palmer Hall, and they would ring a bell every time someone made a gift. Eddie “always wanted to be a person who they would ring the bell for.” And now he is.

The University of Montevallo has recently announced the public phase of its first-ever comprehensive fundraising campaign, The Campaign for Montevallo: It’s About Family. A main priority of the multi-million fundraising campaign is to build annual giving through unrestricted, budget-supporting gifts to provide for the critical needs of students, faculty, coaches and staff.

For decades, Eddie and his family have given generously to the University of Montevallo to support many of the University’s critical needs. He says that he hopes they have left a mark on this place, and they certainly have. He knows that “you can never give enough back because of what the University gave you over the years.” He says, “I loved going to school here. The professors were top notch. They knew your name. That meant a lot to me.” Eddie knows that “it really is all about family”—not just his family, but the countless people all over the world who are a part of the Montevallo family forever. The campus would not be the same without him and his family. It would not be the same without any of the students, faculty, and friends who have given life and character to an institution devoted to the betterment of future generations. As Eddie believes is true for many other Montevallo graduates, he states, “The University is a part of me, always has been. It’s in my blood. If you cut me, I will probably bleed purple!”