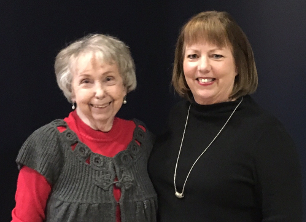 At the University of Montevallo, generations of children have followed in their parents’ footsteps; for this reason, family holds a special place in the community. Alumni Ann and Karen Kelly understand this well, for beyond the Montevallo family each of them found during their years here, they also share a special mother-daughter bond that has led them to share many Montevallo experiences throughout their life together.

Ann Kimbrough Kelly, who grew up in Selma, graduated from Alabama College in 1957 with a degree in Social Work. She had heard about the school from her sister, who had attended for a summer several years earlier. Ann only intended to attend the college for one year, but she quickly fell in love with the atmosphere and people in Montevallo. During her college years, Ann’s roommate was her childhood friend, Mary Frances Tipton, author of Years Rich and Fruitful: University of Montevallo 1896-1996. Ann served on the Purple Cabinet for College Night and was voted Miss Alabama College by her classmates. One of the things she loved about Alabama College was how close the students were to the faculty. She remembers being invited to their homes and forming close bonds with the educators on campus. While she was earning her degree, Ann met her future husband, Agee Kelly, who was attending the University of Alabama. The couple graduated on the same day and were married two weeks later.

Ann asserts that her degree in Social Work gave her the foundation for caring about people. She spent many years of her life volunteering at her church and for the organizations her children participated in. She and Agee welcomed daughter Karen to the family while they were living in Connecticut during the Cold War. Agee was in the Army, but as soon as he finished serving, the family moved back to his hometown of Montevallo. It was Agee who encouraged Ann to give back to Alabama College, because he grew up seeing the value of the school to the rest of the town. They chose to give to the general unrestricted fund, allowing the University to put the money towards what was most needed.

Growing up in Montevallo, Karen Kelly began attending College Night performances at the age of 5. Although she spent her freshman year of college at the University of Alabama, she discovered that the large school atmosphere was not for her. She decided to transfer to the University of Montevallo, but “only if she could live on campus.” There, she became a member of Alpha Gamma Delta sorority (later treasurer), Phi Chi Theta (women’s business fraternity), the Montage staff, as well honor societies such as Phi Kappa Phi and Omicron Delta Kappa. Karen says that her favorite achievement, however, is becoming Purple Side Leader for College Night. She had known she was a Purple from the age of 5, and being able to lead the team to victory in her senior year of 1980 was an accomplishment she will never forget.

With a degree in Accounting, Karen started her career working as a bank auditor; she made a career move to Human Resources, where she managed a variety of areas including employee benefits, compensation, payroll, and HRIS, before retiring in 2016. Although she lives in Birmingham, she never stopped attending Homecoming and College Night performances with her mother. She also became an officer of the Alumni Association (UMNAA), and in 2001, Mary Lou Williams, who served as alumni director at that time, asked Karen and Ann to co-chair the Annual Fund Campaign. Today, Ann still serves on the Alumni Board, while Karen is now on the Foundation Board. Both continue to give back to the school and town that means so much to them.

Ann and Karen are both advocates for the Campaign for Montevallo: It’s About Family, a multi-million dollar comprehensive investment in the knowledge, expertise and values that Montevallo graduates take into their lives and into their professions. They have both contributed to various scholarship funds, which is the first of five campaign priorities. Scholarships are a vital component to the financial aid packages that attract the best and the brightest to study at the University. They also keep students in school and help many reach graduation. Both mother and daughter also support unrestricted giving, the fifth campaign priority, which helps provide for the critical, non-budget supporting needs of students, coaches, and staff.

Karen says, “I love Montevallo, so I take any opportunity to get involved and contribute to its success. Montevallo has always been part of my life. I cherish every opportunity to give back.” She encourages alums to come to the events, stay in touch with friends, and give whenever they can. She also points out that a degree from the University of Montevallo is a good asset when looking for a job in Alabama, because many employers have degrees from or connections to the University. Karen stresses the necessity of giving back, pointing out: “I see every day the commitment of faculty/staff to improve the experience for current and future students. The state resources are not adequate to support the University, and every little bit counts.”

Ann also encourages alums to give, pointing out that graduates of all ages can share the experience of Montevallo. “It really is a special bond. I can meet a graduate from the University and immediately strike up a conversation. Even when two graduates have never met, they are still family, connected by the bond that is formed at the University of Montevallo.”

For more information about the Campaign for Montevallo: It’s About Family, contact Gary Johnson, Comprehensive Campaign Director, as (205) 665-6217.