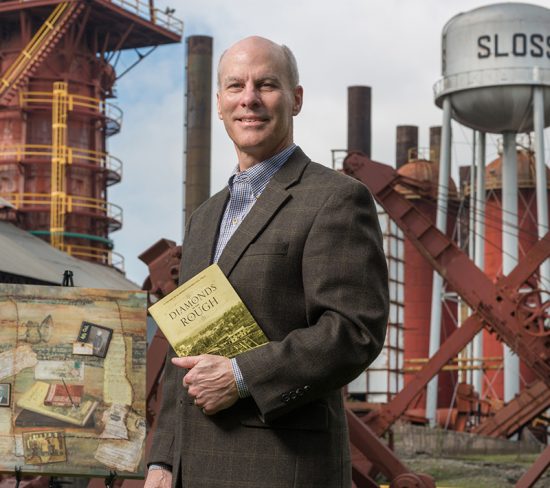 Dr. Jim Day’s book, “Diamonds in the Rough: A History of Alabama’s Cahaba Coal Field” explores the history of Birmingham as an Iron City

University of Montevallo Professor of History, Dr. Jim Day, of Helena, was honored as a Hometown Hero at the Montevallo Mayor’s Hometown Heroes Breakfast on Friday, Oct. 13. Day also served as keynote speaker of the event.

Day, who was raised in Montevallo, graduated from Montevallo High School in 1975. He went on to earn a B.S. in engineering from the United States Military Academy at West Point and an M.A. in history from the University of Georgia.

After 16 years of active duty service in the United States Army, Day earned the title of executive officer, chief of staff and operations officer of a 682-man infantry battalion.

Day began teaching history at the University of Montevallo in 1997, and received his Ph.D. from Auburn University in 2002.

He has been involved in more than 25 professional organizations including the Alabama Association of Historians, the Alabama Higher Education Partnership and serves as the founding president of the Montevallo Historical Society. His book, “Diamonds in the Rough: A History of Alabama’s Cahaba Coal Field,” won the Alabama Historical Association’s Clinton Jackson Coley Award for best work on Alabama local history in 2014.

In addition to being honored at the Hometown Heroes Breakfast, Day has been the recipient of numerous awards including the Quilt of Valor and Military Service Medal from the Alabama Society Sons of the American Revolution, the National Collegiate Education Award and the title of University Scholar from the University of Montevallo.

During his acceptance speech at the breakfast, Day shared 12 paradoxes of everyday life that he experienced during his lifetime. His final point stated that, in order to plan as if we’ll live forever, we must act as if we’ll die tonight. “Relationships are key. Therefore, it’s imperative to make a positive impact everyday,” said Day in conclusion.

By Emily Reed After being named UM’s chief diversity and inclusion officer in 2020, Dr. Gregory Samuels has spent much of his time working to promote an all-inclusive campus environment. “My goals center around having a campus that strengthens, advances and sustains increased diversity, equity and inclusion and actively promotes social justice,” Samuels said. Samuels […]

In 1936, on assignment for Fortune Magazine, writer James Agee and photographer Walker Evans spent eight weeks documenting the lives of impoverished tenant farmers living in Tuscaloosa and Hale counties.  Though the article was never printed, Agee’s descriptions of life as a sharecropper under the weight of the Great Depression and Evans’ striking photography were eventually […]