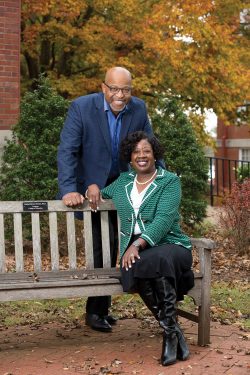 Technically, Jeff Adams ’85 and Tracey Morant-Adams ’88 were connected as sweethearts before they even knew each other.

As a freshman, Tracey pledged Alpha Kappa Alpha. That year, Jeff, a UM senior athlete, was selected as the sorority’s Sweetheart.

Later that same year, while taking Dr. Gary Rovelstad’s cost accounting class, Tracey requested a peer student tutor. While Jeff was one of the two recommended students, it still wasn’t yet to be, “I chose the other student,” she recalled, shaking her head.

“Although the school tried to make ‘the great connection’ for us, it came 20 years later when a mutual friend introduced us,” Jeff smiled. “But after we reunited, it seemed apropos that our engagement photos be taken at the University of Montevallo on Flowerhill.”

Feeling at Home in Montevallo

Having grown up in Alabama, Tracey was always aware of the University of Montevallo. Her mother, who was an educator, was very familiar with the school and its history of offering a quality liberal arts education as a public institution.

“I got a Presidential Scholarship that paid for everything except books. That was a major influencer for me making the decision to attend the University,” Tracey recalled. “I did have opportunities for two other schools, but both were larger. I felt more at home at UM because of the class sizes.”

Also, the ability to remain close to home was attractive to both Tracey and Jeff. Declining offers from several community colleges, Jeff chose to follow his brother — and an athletic scholarship for basketball — to Montevallo.

“I pretty much already knew the campus before I attended school there. Along with the great academic offerings, it just felt like the right place for me.”

This opportunity to create fond memories in a place that felt like home was something that deeply resonated with the Adamses. While they may not have romantically connected with each other during their time as students, they still each built solid connections with many other students and faculty.

“When you were walking across campus, the professors all knew you by name,” Jeff pointed out. “Not a week went by that Dr. Harry Hamilton didn’t call out my name and inquire about how things were going.”

Tracey agreed, “Dr. Hamilton was a wonderful mentor, as were many of the business professors and others, like my adviser, Mr. Lanny McMinn; Dr. Sarah Palmer, the great English professor; and of course, Mary Lou Williams (former director of alumni relations) and Dr. Linda Mahan (former VP for Student Affairs),” she paused. “They took the time to get to know you as a student and even more so as an individual.”

Sharing a Heart for Giving Back

Jeff and Tracey both identify their degrees from the Stephens College of Business as the foundation that helped catapult their successes in the business world. Jeff now serves as the community relations manager for Blue Cross Blue Shield of Alabama. Tracey is the senior executive vice president at Renasant Bank and the chief of corporate social responsibility.

Out of gratitude for the investment Montevallo made in them, the Adamses believe in the importance of giving back to the University.

“It is important the school continue to do great things for other young people like myself, those coming from a small rural area, or perhaps those not having been blessed with scholarships to help bolster their finances,” Tracey explained. “I find myself earmarking more of my dollars for minority students, African American students in particular, and female business students.”

As a former athletic scholarship student and as the current president of the UM Minority Alumni Club, Jeff’s donations are directed toward the Athletic Department and to the work that the minority club does. “We also look at other needs and from time to time, we’ll find a need and try to get behind that as well,” he said.

“Since we are both Montevallo grads, when we give, it’s not split 50 percent to one school and 50 percent to another. It just adds up to 100 percent to the same school!” they shared. “We feel satisfaction from helping the younger generation get a leg up on life.”

Montevallo Political Science Professor Dr. Scott Turner took 20 UM students to Great Smoky Mountains National Park in Tennessee   in March as part of his National Parks and Public Lands class. The class is an elective that’s a mix between political science, environmental studies and an honors course. It’s taught every other year and involves […]

Falcons on Fire: Trailblazing Alumni Who Are Making a Big Impact

For a small university tucked away in a tiny town, Montevallo produces many purple and gold-clad giants. In this issue of Montevallo Today, we pay tribute to Falcons from the past quarter century who have been trailblazers in their respective fields. Nichole M. Harris ’13  Hueytown, Alabama, native Nichole M. Harris graduated from UM in […]