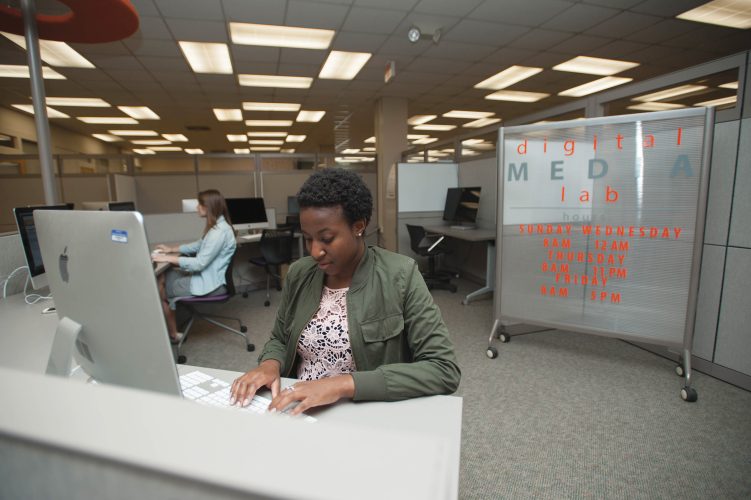 “I want to challenge the notion that the library is just a place to find books,” said Digital Media Lab Coordinator and 3-D Print Lab Manager Michael Price. “You can come into the DML and utilize Photoshop or other programs to make your projects and presentations that much cooler.”

Library Director Dr. Charlotte Ford has been supportive from the word go. Like Price, she sees the future of libraries as a digital repository for resources and has encouraged the DML’s collaborative partnerships. Applications and programs available on the 17 total workstations in the lab include the full Adobe Creative Cloud, MS Office Suite, iMovie, Image Capture, Camtasia software and webcams, VCarve software, Rhino 3-D CAD, six Epson V600 scanners, six Bamboo drawing tablets and Surface Studio.

“I originally envisioned a small space with two to three computers that offered a space to edit audio and video,” Price recalled. “I hoped that it would eventually grow into a larger space offering more hardware, software and tools for students and faculty, but I had no idea it would grow to the size it is today.”

Former Library Director Kathy Lowe gave Price permission to utilize the former storage space in summer 2011 and assisted in writing the first grant for $4,200, which was funded by the University of Montevallo National Alumni Association (UMNAA).

“At the time, we were using 1967 tables as desks, asking the IT department to donate old equipment to us and just needed all the help we could get,” Price said. “That first alumni grant is really what got the DML off the ground, and grants like it have helped us so much along
the way.”

Relationships with professors and students are the other component that have pushed the DML to where it is today. Hannah Hurley ’14, who served as Dr. Alex Beringer’s graduate assistant in spring 2017, said Beringer’s class (on graphic narrative as art and storytelling) is only able to put together its annual comic exhibition in the library because of resources available in the DML.

“The students being able to use Photoshop in the lab to work on their projects for the class and exhibit is huge,” said Hurley. “Michael also helps out a ton with the exhibit every year.”

The number of students working in the lab grew exponentially with that class starting in 2013, so Price took statistics showing the space was too small and approached the Montevallo Quality Enhancement Plan (QEP) and UMNAA for help with funding the lab expansion. The partnership between the lab and the class has been building each year, and it was the first collaboration to showcase what the lab can do for students, faculty and the overall culture of the University.

The QEP funded the first 3-D printer for the lab, a Makerbot Z18, which got the ball rolling for another set of partnerships. Scott Stephens, chair of the Art Department, pledged to help purchase plastic for the lab before the printer was even plugged in. After the success of the Makerbot, alumna Dorothy Allen Wilson ’42 donated $3,000 toward the purchase of two Ultimaker 3-D printers.

Then, Lee Somers’ digital fabrication class purchased a teaching license and 30 seats of Rhino 3-D design software but needed somewhere for students to be able to use it, so he worked with Price to install it on DML computers. Eventually, students will be able to create items in virtual reality, export the blueprints, fix them and 3-D print the items.

Applications for Students and Faculty 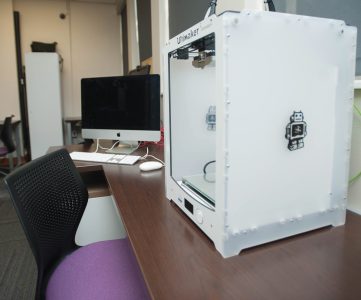 As the DML coordinator, Price himself often serves as the bridge between librarian and professor, a role he relishes when giving demonstrations and one-on-one instruction to students and professors in the different programs the lab has available. He hand-picks students to work in the lab who he knows can assist their peers with all the technologies the lab offers.

“The main goal [of the DML] is to offer a collaborative or single user space with the atmosphere that someone is readily available to help students if they feel like they’re stuck,” said Price. “I have so much access to those professors that we can mirror what they’re getting in the classroom, and not only with technology. Students can get help from people who are inside the lab instead of waiting until their next class to ask a question.”

“It’s good that not only art students have access to technology, people and resources like this,” added DML student worker Brianna Jelks, a senior studying graphic design. “Mass communication students, sociology students, even STEM majors come in and use this lab.”

Eventually, Price would like to work out a system where alumni or students who want extracurricular items printed can do so by paying for plastic and print time. Any items printed for classes are free while the first reserve of plastic is still available.

For additional plastic, Price worked with Kyle Moore, technical director in the Theatre Department, last year to write a grant to fund plastic recycling devices for making 3-D printing filament. The lab was awarded the grant through Montevallo’s Green Fund in 2016, allowing Price and Moore to make four recycling machines and an extruder during fall 2017.

“You take scraps leftover from 3-D printing as well as plastics labeled #2 and #3, shred them, heat the plastic up and push it through an extruder set to specific filament sizes,” Price explained. “I’m trying to make 3-D printing as green as possible.”

The newest addition to the DML is the sound lab, which students can book to work on iMovie projects, conduct interviews or record sound for video projects. The special sound-dampening tiles on the walls and outer windows that make the room ideal for recording were funded through the QEP. Students often check out tripods, video cameras, Flip video cameras and digital voice recorders at the circulation desk for use in the lab.

In spring 2018, two 360-degree cameras will go into circulation at the library. For now, the DML is piloting a digital history class with Dr. John Bawden, in which students take the 360-degree cameras to unique Montevallo locations including Orr Park, King House and Ebenezer Swamp to gather footage that can be viewed by virtual reality equipment.

“The goal is to use that footage as a way to reach out to potential students as well as alumni who cannot make it back to town to see new facilities or the new carvings in Tinglewood (Orr Park). We’re documenting the city’s past, but also what it is now and maybe what it can be,” said Price. “Think about broadcasting. As a women’s college we had a radio station, and we’re now teaching podcasting. That’s a bridge from the past to the current technology. While we’re very considerate of the past, we always want to keep pushing forward.”

How the Montevallo Community Can Help

The potential for the lab is constantly moving, and Price hopes that alumni will step up to support the DML offering students access to technology used by the current job market.

“Reach out to me, come by the lab. Let me show you a few things that we have, and let me show you where we’re thinking of going,” said Price. “Help us reach our goals to support student creativity as well as technology and information literacy.”

Montevallo Political Science Professor Dr. Scott Turner took 20 UM students to Great Smoky Mountains National Park in Tennessee   in March as part of his National Parks and Public Lands class. The class is an elective that’s a mix between political science, environmental studies and an honors course. It’s taught every other year and involves […]

Falcons on Fire: Trailblazing Alumni Who Are Making a Big Impact

For a small university tucked away in a tiny town, Montevallo produces many purple and gold-clad giants. In this issue of Montevallo Today, we pay tribute to Falcons from the past quarter century who have been trailblazers in their respective fields. Nichole M. Harris ’13  Hueytown, Alabama, native Nichole M. Harris graduated from UM in […]