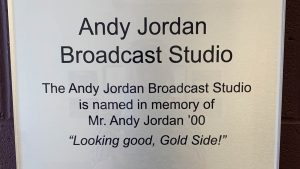 The Andy Jordan Broadcast Studio will serve to honor the memory of a man who was well-loved among his friends and throughout the UM family.

“Andy had the most infectious personality and was a friend to everyone he met,” Keith Shoemaker ’98 said of Jordan. “He loved Montevallo and was involved in every possible way during his time there. His mark on our campus is indelible and this dedication will be a symbol of his light on our tiny part of the world here at Montevallo.”

Jordan was heavily involved on campus during his time as a student, including serving as the Gold Side leader, and left a lasting legacy on campus.

“Andy Jordan was the person who could brighten your day and make you smile even on the most stressful of days,” said Tiffany Bunt ’00, MBA ’13, director of UM Alumni Affairs. “His smile lit up a room as soon as he entered. Whether he was working as entertainment editor of The Alabamian, planning events for the National Broadcasting Society, working on a group assignment for a mass communication class, involved in a project with AKL, working with SGA or leading the Gold Side to victory; his involvement made the University of Montevallo a better place. His friendship and encouragement assured you that you belonged at Montevallo! As a former classmate and forever friend, I am proud to know that his legacy will live on in the Department of Communication.”

Strong Hall is a modern and state-of-the-art facility serving the University’s Department of Communication. The 5,700-square-foot facility houses UM’s Mass Communication and Communication Studies programs. The building features a control room, a production studio and the highlight of the space, the broadcast studio.