As University of Montevallo alumni gather each February to reunite with their classmates and fellow students during Homecoming week, UM’s chapter of the National Alumni Association makes a point to annually recognize one alumna who has reached major milestones by achieving significant accomplishments in their career. 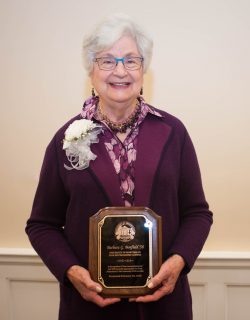 Bonfield graduated from Alabama College in 1958 with her bachelor’s degree in social work and a minor in English. Her senior year, she was recognized by Who’s Who Among Colleges and Universities, an honor that correctly predicted the great things she would accomplish with her career in social work.

Bonfield started her career by working in child welfare at the Department of Pensions and Security, followed by a position at Children’s Aid Society connecting children with foster homes and adoptions.

Bonfield later furthered her education at The University of Alabama to earn her master’s degree in social work in 1976. She proudly led the Jefferson County Commission’s Office of Senior Citizens Activities as executive director for approximately 20 years.

In that role, Bonfield spent time on the National Committee to Preserve Social Security and Medicare, helped develop the AIMS client tracking system to report services for the elderly, developed Pioneer House, an assisted living facility for low income and frail elderly citizens. Bonfield also served in a number of roles on the White House Conference on Aging, the once-a decade conference which makes policy recommendations to the president and congress on legislation affecting senior citizens.

The National Association of Social Workers (NASW) recognized her as Social Worker of the Year twice (1976, 1999) and awarded her the Lifetime Achievement Award in Social Work in 1999.

In 2002, Bonfield was inducted into the Alabama Social Work Hall of Fame. “Barbara was a gifted and innovative executive and director. She made a major impact on the lives of thousands across our country,” wrote former Alabama Congressman Ben L. Erdreich in a nomination letter.

Bonfield has also used her tireless sense of advocacy to support the local Jewish community in Birmingham. She worked to establish the city’s Holocaust Museum and has published two books about the community.

Beyond her many exceptional career achievements, Barbara has remained a loyal alumna to the University of Montevallo.

She has been an active member of the 1896 Society, served on the UMNAA Alumni Board, lent her support to the UM Social Work Program, endowed a scholarship in her parents’ name and offered significant help to The Campaign for the University of Montevallo: It’s About Family, including the first contribution to the upcoming Center for the Arts.

“Her dedication and leadership in a multitude of organizations attest to her genuine interest in making a difference in the lives of others and her community,” wrote nominator Dorothy Ziff.