Your hometown: Born in Alabaster, Alabama

Education: B.A. in mass communication with an emphasis on public relations. 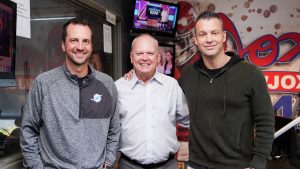 Tell us about your family: I’ve been married now for 21 years to Margaret Hahn (Dunaway) Class of 1995. We have two children, my oldest daughter, Harper Dunaway, is a freshman at Montevallo this semester. My son Carter is 15 and a sophomore at Indian Springs School.

What is your profession? I’m a sportscaster. Currently hosting The JOX Roundtable every morning on WJOX Radio in Birmingham and hosting The Nick Saban Show for The Crimson Tide Sports Network.

What made you choose this profession? I grew up in a modest household with parents who had me as teenagers and I enjoyed watching sports on television. I rarely got to attend big sporting events because of the cost, but I noticed the TV broadcasters were always there and they were getting paid to be there. So at age 11, I decided that’s what I wanted to do, simply to attend the games. Thirty years later I’ve been to sporting events all over the country, from Daytona to the Rose Bowl, and I’ve gotten paid to do it. 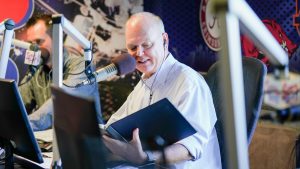 Dunaway in the WJOX studios.

How did Montevallo affect your career path? UM offered me hands-on experience from the moment I walked on campus. The size of the student body allowed me to quickly do live broadcasts of the women’s basketball team, weekly sportscasts and other opportunities that would not have been abundantly available at larger schools. This impacted my career more than any other factor. When I got my first job, I wasn’t a rookie. I had five years of practice at Montevallo under my belt. There was nothing I had to do in my real job that I had not already done several times at Montevallo.

How did you know you belonged at Montevallo? My goal was initially to play baseball for the legendary (UM coach) Bob Reisner, but he quickly pointed out that I had a better chance of succeeding in broadcasting than I did at hitting a college breaking ball. I thank God every day he was right. Very early on, the people I connected with made it the right place for me. What Montevallo gave me was confidence.

What awards/honors have you received?

What is the best advice you have received? The best advice I received was from former University of Montevallo Registrar Helen Perkins. She told me “J.R. (it’s what my friends called me) stop trying to be someone else. You’ve got to find out who you are and love yourself before anyone else can love you.” I was friends with her daughter, Ruth, so I was always moping around her house sad about this girl or that girl. Later in life, not only did that work in my personal life, but in my professional life. I couldn’t be the next Dan Patrick or whomever — I could only be Jim Dunaway. Once I realized that, I found my voice and much more success. 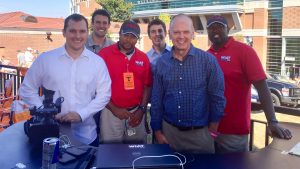 Dunaway, second from right, has traveled to sports venues across the nation while working for WIAT and WJOX.

How does it feel now that your daughter is a Montevallo legacy student? It is pretty amazing that Harper chose Montevallo. It was honestly something we never pushed or expected. The more she searched and researched, she found things she loved about UM and many of those things were the same reasons her mom and I loved Montevallo. It is such a special place, but I think I realize that more now that she is there. She already jokes about the brick streets on a rainy day or little things about dorm life and it warms my heart. I pray her years there are as joyful as mine.

What is your favorite Montevallo memory? How can you narrow down five great years into one memory? Getting pinned to Kelly Green and tossed into the lake by your Pike Brothers, maybe. Guarding “The Rock” as an ATO pledge…then painting “The Rock” as a Pi Kappa Alpha member, maybe. Winning College Night as a Gold member, maybe. Losing College Night as a Purple member, maybe. Broadcasting men’s basketball the day Bobby Joe Jackson and company upset the No. 1 team in NAIA, maybe. Finally passing a foreign language class, maybe. To be honest, right now I can’t remember one bad memory.

What would you like to add? I would like to add that you never realize how much a place and its people can impact your life until you’ve reached a stopping point on your journey. When you reflect back, you see where those experiences shaped you. Montevallo did that for me. The people, the experiences, the talent and the confidence were all bricks laid during my time on campus.