Eric SanInocencio was a baseball player. And that’s what he wanted to continue to be.

But after high school, he didn’t know where to go to continue his career.

In his senior year, his dad told him his choices were the U.S. Army or college. He felt like college was his best option. 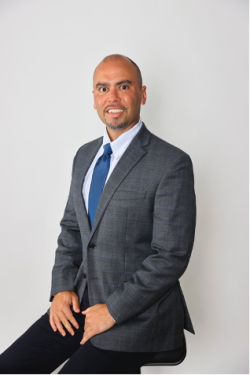 “I had never heard of Montevallo until one of my baseball coaches at Daleville High School told me about it,” he said. “They had mass communication, which I wanted to major in, so I said, ‘OK, that’s where I’m going.’”

“When I first got to Montevallo in the fall of 1998, I thought it was too small for me, but as I got to see what was available in the mass comm department – I wanted to be a sports reporter – and found out how much previous success the baseball coach had, I knew he’d push me to be better and I knew I had made the right choice.”

SanInocencio was a baseball student-athlete his entire four years at UM. He said Baseball Head Coach Bob Riesener didn’t make him any promises about how successful he could be in the program, but he was honest and pushed him to do his best.

After graduating from Montevallo in 2003, SanInocencio went semi-pro playing for the Birmingham Industrial League.

He’s grateful for the training and experience he received at Montevallo, but baseball wasn’t the only thing that made his experience at Montevallo “surpass my expectations by far.” He said it was the campus, the people, his professors and “pretty much everything.”

“I fell in love with the campus. It’s beautiful, breathtakingly beautiful. I felt comfortable and could focus on academics and athletics.”

“I didn’t know how to be a grown-up when I came to Montevallo, but the professors and coaching staff taught me to be an adult. And I got to mature in a non-pressurized environment. I wasn’t one of 600 in a class, but one of 20. Sometimes people cared about me more than I cared about my own progress.”

The Daleville, Alabama, native said the most important people in his life he met at UM, including his wife.

“I met my best friend, DeWayne Peevy, my biggest advisor, Coach Bob Riesener, and the love of my life, Heather Huot, now Heather SanInocencio, my wife, all during my time at Montevallo. Montevallo has not only shaped who I am but directly led to every opportunity I’ve had, personally and professionally. I am forever thankful for my alma mater.”

SanInocencio now works as head of content and brand for the SPC at Amazon, is a member of the UM National Alumni Association,  and coaches his 9-year-old daughter Isla’s softball team and his 11-year-old son Deric’s baseball team.

Some of his achievements include being awarded Montevallo’s Nathalie Molton Gibbons Young Achievers Award in 2016, receiving a 2013 Best in Minority Business Award and winning the first Shorty for Social Good Award for his groundbreaking #TexansCare campaign.

“You’re not going to the University of Montevallo for four years, you’re joining a community network for the rest of your life,” he said.

Christina Powell’s days at the University of Montevallo left her with something else besides a degree from the College of Education and Human Development. They filled her with confidence – the confidence she needed to tackle life, to get up each day and not only try, but thrive. “Montevallo gave me the independence and confidence to […]