While talking with other members in her cohort in George Mason University’s Schar School of Policy and Government, University of Montevallo alumna Emily Bowen discovered her liberal arts background gave her an uncommon advantage. 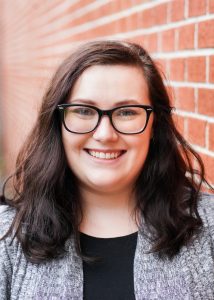 The well-rounded and balanced nature of the education she received at Montevallo provided a perfect foundation for the myriad topics covered in GMU’s international security graduate program.

“Montevallo as a liberal arts college gave me a chance to dip my toe into several different waters. I was required to learn about constitutional laws, state government, local government and international relations,” Bowen said. “I came into my graduate program having a well-rounded knowledge of a lot of things, and I noticed a lot of other students in my cohort didn’t really have that.”

with minors in multimedia journalism, history, pre-law and human rights and public service. While at UM, she was involved with the Alpha Gamma Delta sorority, Student Government Association, College Night and programs offered by the Department of Behavioral and Social Sciences.

She said her involvement in the Model UN program, which is organized at Montevallo by political science professor Dr. Scott Turner, was invaluable. Through the program, Montevallo political science and honors students are assigned a country to represent, and they spend the majority of a semester learning about the country.

The students then travel to Atlanta in November to take part in a regional Model UN conference with students from other universities representing different countries.

“Being involved in that was probably one of the most rewarding experiences I got to be a part of, especially seeing other students get as excited about it as I was,” Bowen said of Model UN.

Bowen’s experience at UM is also benefiting her in her student co-op with the United States Postal Service Office of the Inspector General, where she researches ways to strengthen the way the agency serves the nation and makes recommendations based on her findings.

No matter what the future holds, Bowen said she knows she has a network of supporters behind her at UM.

“I know that if I ever need them, I have professors back here I can reach out to. Being able to have that kind of support back here is something that is completely invaluable to me,” she said. “The education I got at Montevallo has been completely life-changing. I don’t think I would be where I am today if I didn’t have the well-rounded, balanced education I received here. I owe a lot to this institution.”