Dr. Kristin Henson ’88 has built a successful career in the veterinary and pharmaceutical fields over the past few decades, and she attributes her education at the University of Montevallo for laying the foundation for all of it. 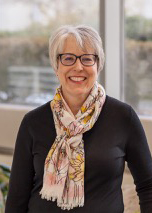 Henson is a director at Novartis Institutes for Biomedical Research in Cambridge, Massachusetts, where she is a strategy and planning lead within the Translational Medicine Unit for the global pharmaceutical company. Before moving to Cambridge in 2018, Henson served in multiple roles at the Novartis site in East Hanover, New Jersey, for 12 years, including head of the preclinical immunotoxicology laboratory, coordinator for the global clinical pathology team and safety assessment expert for drug development project teams.

Her roles at the prestigious firm are the latest in a distinguished career that has taken Henson and her husband, Will, all over the country. After earning a bachelor’s degree in chemistry from UM in 1988, Henson went on to earn her doctorate in veterinary medicine from Mississippi State University in 1992 before joining the staff of a private small animal veterinary practice in Meridian, Mississippi.

In 1995, Henson moved to Gainesville, Florida, to complete a veterinary clinical pathology residency and earn a master’s degree in environmental toxicology from the University of Florida.

After working in the veterinary medical diagnostic field for a few years in the Pacific Northwest, she moved with her husband to New Jersey to begin her tenure at Novartis.

“We joke that the only place we haven’t lived is the Southwest,” Henson said with a laugh.

Although Henson’s career has been primarily in the veterinary and pharmaceutical fields, she said her exposure to a broad array of knowledge as a student at UM has benefited her greatly.

At Montevallo, Henson was a member of the Chi Omega sorority and played trumpet in the Wind Ensemble and Gold Side orchestra.

“I don’t think I can emphasize enough the benefits of a liberal arts education. My whole career began at Montevallo,” Henson said. “The biggest advantage is that you have classes with a wide spectrum of students with different majors, and it causes you to think differently. I have that liberal arts foundation, and it has led me to try different things. It’s ultimately allowed me to do everything that I have.”