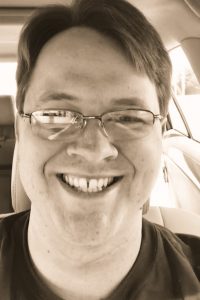 Kyle Moore has been with the University of Montevallo as an Assistant Professor of Theatre specializing in Technical Direction and Sound Design since 2014. He teaches a variety of courses including Stagecraft, Welding, AutoCAD, Sound Design, 3D Printing/Digital Fabrication, and Intro to Theatre. Kyle received his MFA in Technical Production from Boston University and his BFA from Texas State University in Theatrical Design and Technology.

As the Technical Director and Sound Supervisor for the University of Montevallo, Kyle is responsible for bringing the director’s vision and unique scenic designs for each show to life. He has overseen all aspects of set construction and sound design for each of UM’s four Mainstage productions per season since he joined the UM faculty in August of 2014.

Kyle currently works as a freelance Technical Director and Scene Designer for the Birmingham area. Recently he worked for the Red Mountain Theatre Company as a Scenic Consultant for “Newsies” in Birmingham, AL. Prior to coming to Montevallo, he worked with the American Repertory Theatre in Cambridge, Massachusetts as a Draftsman and Staff Carpenter. There he was able to hone his skills and had the opportunity to work on a number of Tony award winning productions, including “Finding Neverland”, “All The Way”, “Glass Menagerie”, and “Pippin.”   He also was a Draftsman and Carpenter for Teller’s production of “The Tempest” which was performed in both Cambridge and Las Vegas. Before moving to Boston, Kyle lived and worked in and around Austin, TX for 6 years. In addition to working as a Staff Carpenter and Assistant Technical Director for ZACH Theatre, he had the pleasure of working on a number of productions with companies including Austin Shakespeare, Salvage Vanguard Theater, Rude Mechanicals, and Ballet Austin.

He is a member of United States Institute for Theatre Technology (USITT) and Southeastern Theatre Conference (SETC). Kyle is currently researching and writing a series of papers and a book about producing high impact theatrical effects on a small budget and utilizing 3D technology and digital fabrication for theatre, and will be presenting at the upcoming SETC conference in Mobile, Alabama in Spring 2018.

When not doing Theatre, Kyle enjoys cooking, playing board games, working on home improvement projects and spending time with his wife Vanessa and children Dylan and Eliza.