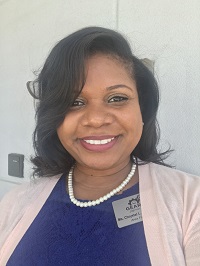 Mrs. Abernathy is a native of Birmingham, AL. She brings over a decade of experience to the grant. Chrystal received her bachelor’s degree in biology from Tuskegee University. In 2014, she received her Master’s degree in Education from the University of Montevallo. She has a background in secondary education, curriculum and instruction, and professional development and has worked for Birmingham City Schools, Shelby County Schools (Memphis, TN), and Jefferson County Schools. Mrs. Abernathy was granted a fellowship by the National Science Teachers’ Association in 2013 and was recognized for her “Outstanding Excellence as an Educator” in 2014 by the Birmingham City Schools District.

Chrystal Abernathy is a passionate educator who believes in every student and educator she meets. She finds fulfillment in her work and strives to make a difference by being an advocate for all children each day. Her inspiration comes from the visionary educator and civil rights activist Mary McCloud Bethune who said, “Invest in the human soul. Who knows, it might be a diamond in the rough.”