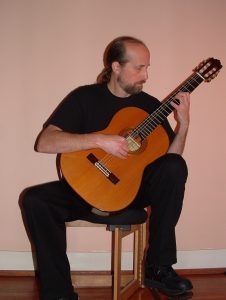 Professor Michael P. Sterner earned bachelor degrees in physics and mathematics at Millersville University and master’s and doctorate degrees in pure mathematics from the State University of New York at Albany. He studied classical guitar with Ted Williams at Temple University and flamenco guitar with Peter Galloway in Seville, Spain. He has performed at various venues, including Birmingham’s City Stages and the Philadelphia Art Alliance Award of Merit gala honoring Dame Margot Fonteyn.

Dr. Sterner is the author of the Montevallo Observatory Project, and director of the James Wylie Shepherd Observatory (JWSO), along with philosophy professor Michael Patton.

Construction of the JWSO began in August 2008, and the observatory had its dedication on Founder’s Day in October 2008. The hydraulic pier, robotic mount, handrails, and telescope were installed in summer of 2009, and the Observatory became fully functional in October 2009. The JWSO had its Grand Opening and First Light Celebration in November of 2009, with more than 200 people in attendance. The Grand Opening featured the choral piece How Sweet the Moonlight, composed by Dr. Joseph Landers for the JWSO, and performed by UM faculty and students. The event generated a front page story in the Birmingham News, along with $10,000 in private donations. We have raised a total of more than $400,000 for the project to date, and have served more than two thousand visitors since our grand opening. Phase II will include an open-air amphitheater, a Command Center (completed January 2014), a remote celestial observing deck (under construction), educational exhibits and nature trails. As well as being a centerpiece for the University of Montevallo, the JWSO is the premier public observatory in the state of Alabama.

In 2013 he received the UM Faculty Service Award for outstanding service to the University and community.