Growing up, UM senior Jay Houser was no stranger to the Montevallo community. He attended the local elementary school and frequently visited the University of Montevallo with friends and family, but he always envisioned himself going to a big school.

By his senior year of high school, Jay founded SkyRocket, a successful full-service digital marketing company that he wanted to continue after graduation, while also pursuing his education. 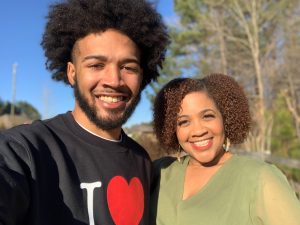 Kendralyn Houser, Jay’s mom and a former college recruiter, said when making a college decision, it was important to consider non-tangible factors that would ultimately impact her son’s experience.

“I wanted him to grow in all areas, not just academically,” she said.

Jay visited UM as a prospective student and saw the University from a completely different perspective. He was pleasantly surprised by the resources and opportunities that were available and by the vibrant student body with diverse backgrounds and interests.

He enjoyed the hands-on environment created by UM’s faculty, staff and administration, and quickly took advantage of the opportunities, mentors and other aspects that make the University special.

“All mothers want to know that their child will be cared for no matter if they are near or far, and UM gave me that feeling from the moment we arrived,” his mom said.

Although Jay had a big college vision, he said Montevallo was a “gem under his nose this whole time.” After choosing UM, he quickly emerged as a leader and shining star on campus.

As an honors student and business management major, president of Alpha Phi Alpha Fraternity. Inc., a M.A.P.S. Scholar and former vice president of the National Panhellenic Council, Jay has engrained himself in the rich culture of Montevallo while also contributing to the growth of campus. As a business owner, he still finds time to invest in the next generation of Montevallo students serving as a Montevallo Master, Montevallo Maven, M.A.D.E. Ambassador and student worker within the President’s office.

As a M.A.D.E. Ambassador, he contributed to helping Montevallo’s minority population grow and provided students with the resources and support, just like he was given when he arrived on campus.

“Being a part of M.A.D.E. gives me a sense of purpose that will last even past my time as a Montevallo student,” Jay said.

Jay has played a major role in developing a culture of excellence in M.A.D.E. and encourages prospective students interested in Montevallo and the M.A.D.E. program to “step out on faith and take the leap.”

His mom said parents who are currently trying to decide on a college should seriously consider UM. It offers the perfect culture for students to grow academically, socially and personally.

“UM gave me everything that I needed along the way to be successful, and for that I’ll forever give back to UM,” Jay said.

The University of Montevallo and M.A.D.E. are working to make sure all future Falcons feel the same way.