During the annual event hosted by the UM Philosophy Club, audience members are asked to imagine there has been a nuclear war, and the survivors (the audience) are setting sail to rebuild society from the ground up. 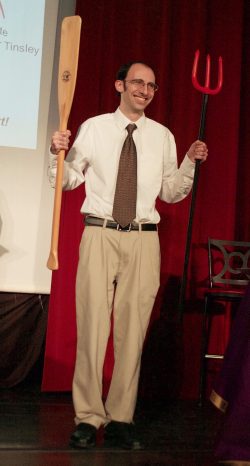 Dr. Scott Varagona holds the Oar of Victory for a record breaking third time as a competitor.

A group of academic-types attempt to argue their way on to the raft’s one remaining seat by explaining why his or her discipline is the one indispensable area of study that the new civilization will need to flourish.

To make it even more of a battle, the devil’s advocate appears to assert why none of the panelists are worthy of the remaining seat.

At the end of the debating, the audience votes; and the lucky winner (if one succeeds) receives the oar of victory and climbs aboard the raft, waving goodbye to the others.

The Life Raft Debate has been held each fall semester since 1998, making it the longest continually held debate of its kind.

Varagona first won the debate in 2013 as a panelist arguing for the discipline of mathematics. He claimed a second win in 2015 as devil’s advocate, becoming the first to win two Life Raft Debates. However, since he was not representing any discipline, the Life Raft Debate still awaits its first person to win twice in the same discipline.

Learn more about the Life Raft Ddebate and watch past debates at: www.montevallo.edu/life-raft-debate/